Mention the words Farrow and Ball to any decorator and they will shake their head with a derisive snort, claiming it’s average-quality paint with a hefty price tag, marketed for foolish, middle-class women, with too much time on their hands.

So naturally, being a foolish woman and having too much time on my hands, I developed a craze with Farrow and Ball that very rapidly spiralled out of control.

It began with a simple task to paint the bathroom of my rental flat; the last tenants had moved out after three years and it needed a lick of paint to smarten things up. I pottered down to Homebase, naively thinking I’d just grab a pot of any old paint and slap it on. But when I headed down the paint aisle, my eyes were inexplicably drawn to the enticing brown sample pots of… Farrow and Ball.

I’d already had a taste of F&B in the past, having painted the chimney breast of my beloved flat in the strangely-named Dead Salmon, a kind of pinky brown colour – which now I come to think of it, actually does resemble the colour of out-of-date fish. 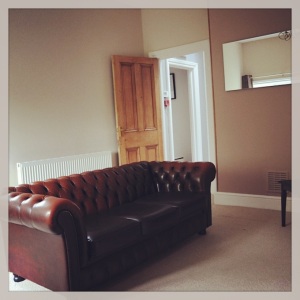 For the bathroom, I wanted a shade of blue. But what was it to be? Parma Grey, Lulworth Blue, Blue Grey? The choice was boggling.

After much deliberation, I plumped for Borrowed Light – a  beautiful pale blue. I loved it. 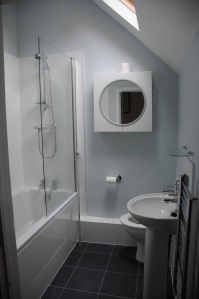 It was at that moment that I crazily decided to paint my whole flat in Farrow and Ball – a decision that would go on to cost me several hundred pounds, many hours of labour, and untold exasperation to the long-suffering husband.

F&B connoisseurs will tell you that there’s a depth to the paint that Dulux and Crown just can’t compete with. I’m not sure this is strictly true but this is what I kept telling myself, in order to justify the paint pot splurge.

I began carrying around a colour chart of F&B and would sit studying it several times a day, with all the intensity of a Truly Crazy Person. Friends, long since tired of my painting patter, attempted to stage an intervention. But when they snatched the paint chart off me, I began rocking in the corner, muttering ‘Elephant’s Breath, Elephant’s Breath’ repeatedly, until they reluctantly placed it back in my palm.

Remember that 90s game show called You Bet! hosted by Matthew Kelly, in which contestants had to complete unlikely challenges such as memorising all of the road signs in the UK? Well, I could easily recall all 132 Farrow and Ball colours, in order, and come away with the star prize.

Some evenings, I would roar off on a whim to the Harrogate F&B shop, to stare dreamily at the paints on display. The shop assistant there became my new best friend and I started phoning her at all hours of the day just to chat about paint: ‘Do you really think Rectory Red would go with Oval Room Blue? Really? I was thinking that too! Ha ha haaaa!’

I was clearly unstable.

The spare bedroom was painted in probably my favourite colour: Light Blue (a kind a blue-grey that changes with the light of the day), complemented by Slipper Satin on the woodwork.

Manor House Grey framed the landing, while the main bedroom had a palette of purply Brassica and Calluna – the colour of ‘Scottish heather’.

Finishing the walls, I was in too deep to end things there – so I began feverishly painting the furniture. Any wooden item that wasn’t nailed down was at risk of being ‘Farrowed’ in my upcycling mania.

The worn church chairs were painted Oval Room Blue and Chappell Green respectively, and a tired, old dresser enjoyed a new lease of life with a hearty lick of Dove’s Tail.

My irritating neighbour Greenclaws came sniffing around and was so taken with my efforts that he gaily skipped off to Homebase himself and returned clutching a tin of Middleton Pink (probably to match the garish plastic lobster that adorns his kitchen wall).

And then it was over.

The paint pots were stacked in the attic, a colour scheme was thrust in the hands of my new tenants, should they feel the need to so some touching up, and I reluctantly trundled home with my paint brush. 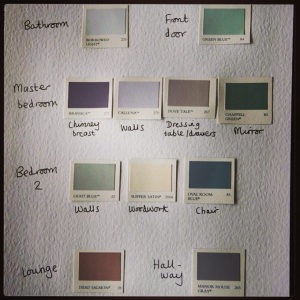 For about a week, I had to go cold turkey, tossing in my sleep and chanting, ‘Mizzle… Mizzle – it’s reminiscent of a West Country evening mist…’

Two months on, I think I’ve just about recovered.

I passed a F&B shop in Marylebone last week. And even though every bone in my body wanted to rush in, ambush the woman and yell, ‘Do you really think Arsenic goes with Brassica?!’, I managed to keep on walking.

21 thoughts on “The Farrow and Ball Obsession”