I already have a very unhealthy relationship with Caffè Nero, spending around £1000 a year there purely to fund my coffee addiction.

But now I’ve managed to encourage a whole band of eccentrics who seem determined to befriend me, despite my generally aloof demeanour.

First, there’s the old man who sits in the corner all day eating porridge. He’s become a regular fixture in the last six months and now he’s there so often he’s practically part of the furniture.

When Caffè Nero opens at 7.30am, here’s already in position by the window, spoon in hand. Goldilock’s Three Bears have nothing on this old dude; he eats a least five pots of porridge a day, often staring forlornly out of the window. 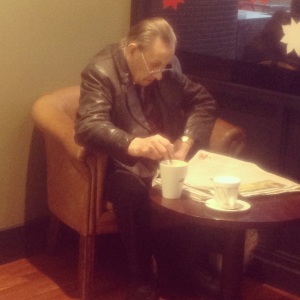 When I first set eyes on him, I thought he looked a bit lonely, so I threw him a beaming smile as I clattered out with my take-out coffee on my way to work.

And you know what he did… he scowled back at me cantankerously.

Undeterred, I continued to smile every morning, always receiving a frown back. This little game went on for about a month.

And then finally – a breakthrough! The scowl turned to a grimace… which finally became a smile. In recent weeks, I’ve even been getting a little wave from him. It feels good.

And then today, as I type away… the biggest breakthrough yet. Porridge-Loving Pensioner actually mouthed over to me, ‘Do you want a cup of tea?’, holding his teapot aloft.

‘I’m okay,’ I mouthed back. ‘I’ve got a coffee.’ I held up my cup to prove this, and hid back behind my laptop.

Porridge-Loving Pensioner appears to have turned from a miserly Victor Meldrew to a warm-hearted Werther’s Original grandad in a matter of months.

I even saw him offering a small child a sweet the other day. 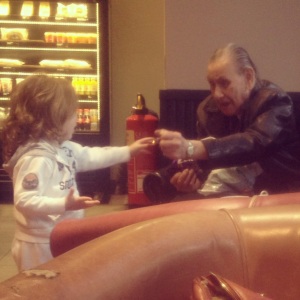 I was just getting back to work when there was a bang on the window – and a round, beaming face peered through the glass at me. Oh lordy… it was my portly friend The Italian Wanderer. I’ve known of The Italian Wanderer for a couple of years now but I’ve purposely been keeping a low profile for fear of encouraging him.

The Italian Wanderer is one of the stranger characters out of the motley bunch. He’s in Caffè Nero nearly every night with his Italian brother: a taller, goofier version of himself.

I think they quite fancy themselves as a pair of extras in Goodfellas. But if I was to cast them in a movie, they’d play two hapless henchman, permanently scratching their heads and bumping into each other in a clownish fashion (if you think of those bungling burglars in Home Alone, you kind of get the picture).

I gave The Italian Wanderer his moniker due to his strange penchant for wandering the streets for hours on end. Come rain or shine, he walks up and down Harrogate Road all evening long (brother nowhere to be seen). This is no exaggeration. Sometimes he takes a break from the roam – and sits at the bus-stop watching the world go by. 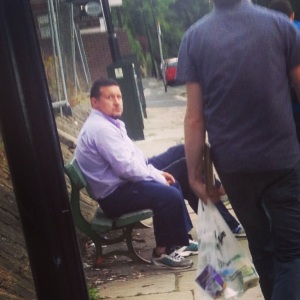 I’m mildly intrigued by his nomadic lifestyle but I haven’t dared to probe beyond a friendly wave for fear of Getting Too Involved.

Getting Too Involved is basically where you go beyond a simple smile and wave and descend into full-blown conversation. Don’t get me wrong, I like a smile and wave with an eccentric on the best of days, but I’m a solitary soul at heart – and the last thing I want to do is start sharing coffees and ruminating on life with these oddities.

Last week, The Italian Wanderer accosted me in Caffè Nero and starting firing a series of probing questions my way, ending with, ‘Is it okay if I say hello to you from now on?’

‘Of course!’ I said, smiling in what I hoped was a friendly but not-too-encouraging manner.

Talking of Getting Too Involved, one person I have Got Very Involved with is widower Peter (documented in My Coffee Shop Friend). He looks scarily like the bad guy ‘Mike’ from Breaking Bad.

Well, it turns out Peter has a friend: Malcolm – another retiree at large, who keeps coming over to talk to me. I say ‘talk to me’ but he sort of wanders over and mumbles for a while, smiling in a vacant way before wandering off again – sometimes mid-sentence.

I usually hide behind my laptop under the guise of Being Terribly Busy but the other day, I was on the receiving end of a two-pronged attack from Peter and Malcolm, who came and sat with me for an hour regaling me with tales of Leeds’ glorious past. I secretly loved it.

It transpires that they were both avid body builders back in the day, and trained with none other than Arnold Schwarzenegger, who joined them in Leeds for a year, living in a small flat in Crossgates (who knew?!), along with local legend Reg Park (former Mr Universe, no less).

Peter and Malcolm love to jest that they’ve managed to pick up a young girl (me!) and sometimes even comment on the length of my skirt!

When I go into Caffè Nero at the weekend with the husband, I’m now getting waves from all corners of the room – mainly from the over 60s.

The Husband is astonished.

‘Don’t you GET INVOLVED!’ he says.

6 thoughts on “Shooting The Breeze With OAPS”