I seem to have developed an obsession with palm trees. It kind of crept up on me. I’m not even sure I actually like palm trees. All I know about them is that they’re prickly, high maintenance and only thrive in warm climates. A bit like me really.

My passion for palm trees developed purely because of my surname. When I was younger, I got called Palms or Palmtree. It kind of stuck.

At Sheffield University, I had a weekly horoscope column in the uni newspaper called ‘Mystic Palms’. It involved a really bad picture of me staring vacantly into a mock crystal ball. I had to come up with 12 different forecasts, as pithy and humorous as possible. Every single week. And I didn’t even get paid to do it.

In the university bar, fellow students would occasionally peer curiously at me and say, ‘Are you that weird Mystic Meg character from the uni paper?’ It didn’t do much for my street cred.

When I was 19 years old, I did some work experience at a media company in Manchester (this sounds a lot grander that it actually was; the reality being that I had to spend a whole week writing articles about gnarly feet for a podiatry website). At the end of the week, the man in charge actually wrote out a cheque for my expenses to ‘Katy Palmtree’, believing my email moniker to be my actual name. I thought this was very funny.

To my knowledge, no one has the surname Palmtree. But there are a few genuine people called Palms knocking around.

I was approached by one such person in Harrogate, resplendent in a cream suit and a man-from-Del-Monte hat – the kind of get-up you’d expect from someone who goes by the name of Mr Palms.

‘My name is Ted Palms,’ he said, shaking my hand. ‘And I wondered if you would be interested in selling me your number plate.’ (My number plate is P4LMS).

‘I’ve only just acquired it,’ I said.

But Ted Palms wouldn’t be palmed off that easily.

‘What’s your surname?’ he asked, suspiciously.

Our eyes locked in a competitive Palm-off. He was probably thinking, ‘I’m a bona fide Palms; I deserve this number plate more.’

‘But lots of my friends call me Palms,’ I hastily added.

Ted Palms shuffled off, not before pressing an embossed business card in my, er, palm – if I should ever change my mind. 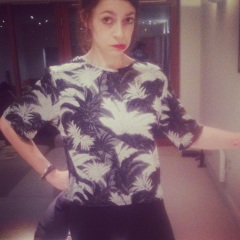 Palm tree shoes? Not quite.

In the first throes of love, the husband was only too happy to embrace my love of palm trees, purchasing said number plate, and then – on the eve of our wedding – procuring a little palm tree pendant from Tiffany’s (cheese alert). 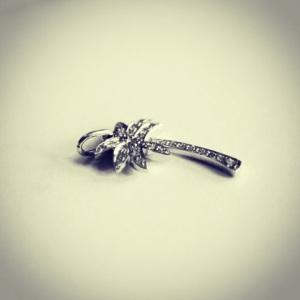 These trendy palm tree slipper shoes, as endorsed by Alexa Chung no less, were on my Christmas wish list too. 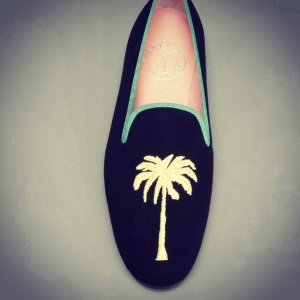 The husband, whose interest in all things palm-based has begun to wane, took one look at them and said, ‘Do you actually like these shoes, or is it simply the fact that they’ve got palm trees on them?’

‘It’s simply the fact they’ve got palm trees on,’ I said, in a small voice.

Things came to a head in Topshop Oxford Circus this Saturday, where I found myself wrestling with a two-piece palm tree suit. It looked ridiculous. 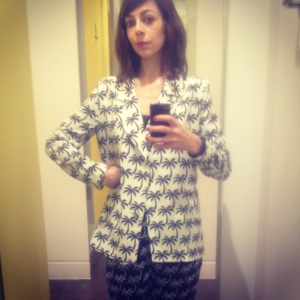 That afternoon, I had two missed phone calls from Someone Important. Someone Important was terribly baffled because she was greeted by a recorded answerphone message of my 21-year-old self saying: ‘You’re through to Palmtree Productions. Please leave a message.’

She was convinced she’d mistakenly stumbled across some Miami-based TV studios. It took a lot of explaining.

I’m afraid there is no such thing as Palmtree Productions. I’ve had vague intentions of removing this silly message for the last 13 years – usually after a call from Someone Important – but then promptly forget.

I told my friend Anna about my intention to purchase the shoes with palm trees on.

‘Be careful,’ she said. ‘A woman I know once decided she liked hippos.

‘She’s now basically drowning in chintzy china hippos. Her house is cluttered with them. Soon, she might start looking like a hippo too.

‘If you’re not careful, people will start buying you ceramic palm tree ornaments,’ she went on. ‘You’ll end up being known as that weird woman with the peculiar obsession with palm trees.’

I’m not sure I want to end up as a mad old woman head-to-toe in palm leaves and surrounded by porcelain palm trees.

I think it’s time to say goodbye to Palms.

2 thoughts on “In The Shade Of The Palms”