I was once the doyenne of my local Caffè Nero, attracting the attention of a plethora of wrinkly retirees. Not any more. Now I have a new competitor in town who goes by the name of LEGS.

I’d never even heard of Legs this time last month. But there she is, batting her eyelashes at the oldies, driving Porridge-Loving Pensioner to hospital, and holding court with the morning regulars (Peter, Malcolm and co,) – while they all listen to her every word in rapt admiration.

The woman can do no wrong.

According to a Peter (wet-eyed widow who gave Legs her namesake due to the fact that her well-toned pins are always on display), Legs is an amazing person: she’s studying for a doctorate in Sport Science or something, she’s a ‘strong and independent’ W-O-M-A-N (cue Beyonce soundtrack), she went travelling the world on her own; she’s probably about to make a breakthrough in finding a cure for cancer. 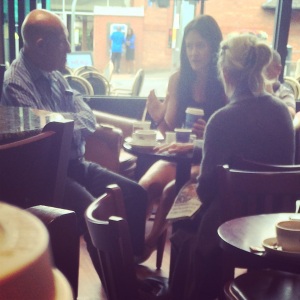 ‘Never judge a book by its cover,’ says Peter.

Our resident do-gooder isn’t called a Legs for nothing. She really does wear shorts every single day, rain or shine. I tell a lie: I might have spotted a pair of stripy leggings the other day. Still, it leaves me often pondering, what does she wear in winter?! 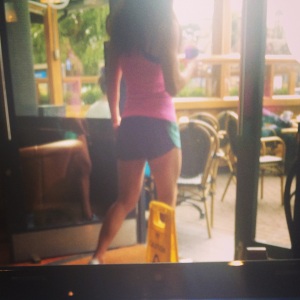 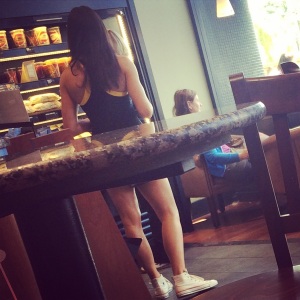 Peter came over the other day and said he realises that he’s been neglecting me now that Legs is in town. I didn’t disagree.

Peter attempted to introduce me to Legs in the coffee queue but she merely narrowed her eyes and smiled unconvincingly, in that slightly competitive way that only girls can fully understand.

Luckily for me, I have an ace card up my sleeve: I’m going to Mallorca in a week or so and Malcolm is still hellbent on imparting every last drop of knowledge he has on his favourite holiday destination.

Not content with passing on all of his literature, he has now taken to recommending restaurants, the type of wine we should buy, and the places we should visit. He even had a recommendation on the local brandy.

Malcolm pottered in the other morning and made a beeline straight for me (bypassing Legs. Ha!).

I was sat in the window (which had angered Adrian The Academic who likes to sit in that particular window seat while he’s studying quantum mechanics and reading up on complex geometry – more on him another time).

‘I’ve barely been able to sleep for worry that you might not know how to get from Palma to Orient,’ said Malcolm.

I nodded in what I hoped was a suitably ‘I’ve-been-concerned-too’ manner, while looking up from one of Malcolm’s Mallorca books. I carry one around in my bag and then scramble to get it out and bury my head in it when I see him approaching.

‘There’s two routes, you see,’ he went on. ‘And I’m worried you might take the wrong one.’

An hour later, and following some very laborious directions, I reassured Malcolm that yes, I now knew the correct way to Orient and yes, I would stop at that quaint little village en route, and yes, I would try some tapas at that little taverna he loves so much.

I’m half expecting Malcolm to come in with an actual hour-by-hour itinerary for our holiday next week.

Porridge-Loving Pensioner, meanwhile, has been all but BANNED from Caffè Nero. That’s not strictly true; the manageress told him that unless he stop pestering people to give him a lift to the hospital and then getting irate when they refuse, he won’t be allowed back. PLP took umbrage at this and has now GONE ROGUE.

He occasionally shuffles around grinning toothlessly at people but has taken to frequenting other eateries in the area. I saw him quite contentedly tucking into a large bowl of fries in the bar next door, bits of grease splattering his stained suit. The porridge days are over.

I went into Caffè Nero avec husband this weekend and who should be standing in the queue happily conversing with Peter but my nemesis Legs.

The husband studied her for some time, legs and all.