I realised this week that there’s been no update on The House-that-we-bought-but-then-couldn’t-get-planning-permission-for for some time.

That’s probably because I became so fed up with the house, I have been largely pretending it doesn’t exist and going about normal life in our apartment quite contentedly.

I occasionally drive past our woebegotten domicile, just to check it hasn’t accidentally burnt to the ground (which, thinking about it, might not be such a bad thing, as I’m sure building a house from scratch would be easier than the complex to-ing and fro-ing with the planning department over building a rear extension that NOBODY CAN EVEN SEE). 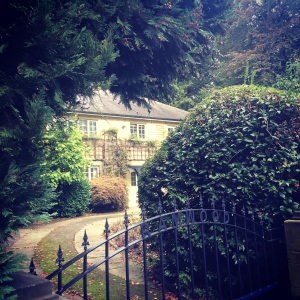 To cut a long and convoluted story short, I didn’t end up having an affair with planning officer Peter Grant in order to get our plans passed (as I was contemplating in previous blogs). This wouldn’t have been possible anyway, given that after a while he stopped taking my phone calls.

What actually happened in the end was that we had to re-apply to the council for a large single-storey extension under Permitted Development rights: another arduous process which basically involves submitting the plans to the same planning department who rejected our plans in the first place – just for them to confirm that these new plans do not, in fact, actually need any planning permission. Confused? Me too!

The final perverse twist to this planning saga is that we’ve ended up pretty much the same rear extension we wanted to begin with, yet now the council have absolutely no control over it. Take that, Laura Hogg!

In the midst of all this red tape wrangling, I was supposed to be putting together some sort of design scheme for the house. I went through all the usual motions of buying home magazines, creating boards on Pinterest, and re-igniting my old Farrow and Ball obsession.

But then I realised I was completely and utterly paralysed by my old affliction CHRONIC INDECISION.

When you suffer from chronic indecision like me, choosing just one bath tap might take two to three weeks of extensive research, followed by another week confirming the decision, followed by another two weeks worrying about whether you made the right decision or not, followed by the dawning realisation that you might have made the wrong decision and would have to live with it for the REST OF YOUR LIFE.

So the thought of committing to several bathrooms, a kitchen, floorings, carpets, decking, windows, doors, fire places, door handles – basically every fixture and fitting in a whole house – was completely overwhelming.

First, I decided to tackle the flooring. I spent days visiting flooring shops, scouring the internet and perusing Pinterest. Eventually, I decided I wanted a dark wood floor in the hallway. I then couldn’t decide exactly which type of dark brown: a reddy dark brown, a browny dark brown or a dark dark brown. 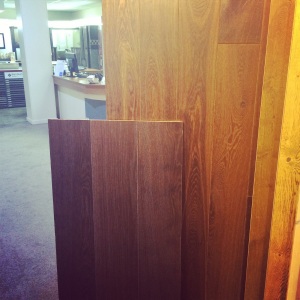 It was a first world problem on a whole new scale.

For about a week, I was gripped by flooring indecision. Jonny at the flooring shop down the road became my new best friend. I’m not sure how to describe Jonny: he was like a young Tom Cruise, with slicked down hair and a baby face. He was infinitely patient and never seemed to tire of my deliberations.

But what really stood out was his smell: he smelled really, really nice – like freshly washed laundry. Together, we poured over every dark wood flooring he had in the whole store, while I umm-ed and ahh-ed and took photos and looked at each piece in every possible light.

The following day, we went through the same process again, while I inhaled baby-faced Jonny’s summery meadowy scent.

I didn’t manage to get a shot of Jonny but you can just see his polished shoe peeking into the corner of this picture. And how nice are these carpets?!

Later that week, I was just down at the bathroom place choosing tiles (with a man called Gary who became so exasperated with me he actually broke out into a sweat and kept clutching his chest like he was in the grip of a bad bout of angina), when I decided to pop in and see my NBF Jonny.

It might have been my imagination but when I walked in, I’m sure the guy who sits opposite Jonny muttered, ‘Oh look, she’s here again!’

No sooner than the words had left my mouth, I realised that perhaps I WAS stalking fragrant Jonny.

‘I just thought I’d pop back and have another look at the difference between Autumn Dawn and Cherry Oak,’ I added, trying to adopt a bright smile and an air of This Is Perfectly Normal Behaviour.

That weekend, I took the husband to see Jonny. This was now my fifth visit in one week.

‘I apologise for my wife being such a pest,’ said the husband. ‘She is very indecisive. I’m sorry that you have to put up with this.’

Jonny smiled at me in a way one might placate a psychiatric patient and dutifully went off to fetch two samples of the dark brown wood I was currently deliberating over.

‘Have you smelt him yet?’ I whispered to the husband.

2 thoughts on “Floored By Indecision”