Just when I thought things had settled down at our apartment block, I’ve found myself in a Cold War over parking with Slovenly Sonia, the lazy new tenant at Apartment 8.

There’s an unofficial parking space by the side of our apartment and while it’s always been offered up on a ‘first come, first served basis’ the husband and I have been getting first dibs on it for the last few years (bar the occasional wrangle with Belligerent Bill from Apt 2).

We parked there so often, in fact, that we had begun to think of it as our own private parking spot.

This was before Sonia and her cream Mini arrived. She descended on our apartments a couple of months ago and now hogs the space ALL of the time. This is largely because a. she doesn’t appear to ever be at work and b. she never seems to leave her apartment. 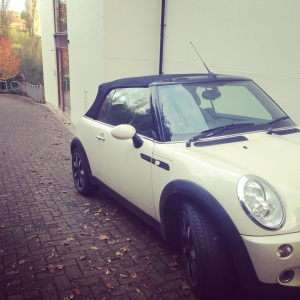 Another resident apparently asked Sonia if she could please park in her allocated spot down the hill and leave the spare spaces for those who had two cars. Slovenly Son refused, muttering something about the car park ‘being a mess’.

After a few weeks of seeing her cream Mini parked there, I began to get rather resentful. Sometimes, when I walked past, I had an irrational urge to kick the car – or in wilder moments I imagined beating it with a tree branch (a la mad Basil Fawlty in the opening episode of Fawlty Towers). 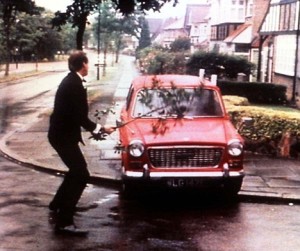 Then one evening, on sighting the cream Mini smugly nestled in its usual spot, I decided enough was enough.

I grabbed a Post-it note, scribbled, ‘Why can’t you just park in your own space and stop hogging this one?’, hared back out and slapped it on her windscreen.

The next day there was an ‘all residents’ email from Sonia herself.

‘Hi, whoever put the post it note on my car … Could you have the decency to contact me direct …. Tenant or owner we all have the same rights ….the space is directly at the side of my apartment and it is an unallocated space and I was informed it is whoever gets there first? If I am in that spot and my space is empty I don’t have a problem with anyone parking in my spot… But I have plantar fascititus so find it easier on my foot to park at the top.

Thank you and kind regard.’

Plantar fascitius?? I hastily Googled this condition and discovered that it’s basically a sore foot usually suffered by people who wear poorly-fitting shoes or lead a sedentary lifestyle.

‘Sounds about right,’ I huffed to the husband.

Plantar fascitius is quite similar to Policeman’s Heel, which I rather like the sound of (the name, not the condition).

Later that week, I actually saw slipshod Sonia heading out on foot. I gave her a cheery wave: the kind of cheery neighbourly wave that I hoped said, ‘Hello friendly neighbour; it wasn’t me that put a passive aggressive Post-It note on your window!’.

It didn’t escape my notice that she was wearing a pair of high heels and appeared to be clopping along at ease. Surely a true plantar fascititus sufferer should be in a sensible pair of Clarks brogues? Policeman’s Heel, my ass!

The next day, I returned home to find the much-maligned space vacant and cream Mini nowhere to be seen.

I was then caught in a dilemma. Do I make the most of Slovenly Sonia’s absence and snap the space up while I can? Or, in taking the space, am I effectively advertising, ‘I’m the person who put the Post-It note on your car. I’m the friendly neighbour who’s not so friendly after all!’

I spent so long dilly-dallying that wranglesome Sonia arrived home and zoomed straight in. I’d lost out again!

A week has now passed since the Post-It note and I’m determined to reclaim the space. It’s simply a matter of lying in wait for her next trip out.

Once I’ve secured the spot, it’s going to be difficult to give it up again. I might have to leave my car in situ and take public transport for a few days.

‘You can spout all the fancy foot conditions you like at me, Sonia,’ I thought, grimly.

But one thing’s for sure, I’m going to reclaim that space. I’m in this for the long run.