It’s Saturday morning and the perfect chance to catch up with Peter, my weepy 70-year-old coffee shop pal who’s looking for love. 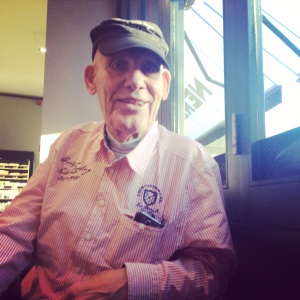 Peter’s love life is now so complicated that even I’m struggling to keep up. Despite claiming to be a one-woman man (he was devoted to beloved Brenda for 50 years), he seems to have at least five women now on the go. That’s a lot of irons in the fire.

Here’s our Graham with a quick reminder: there’s ‘Gates’ – a woman who lives near by (who opens her gates as a signal that he’s allowed in for a bottle of Lidl Prosecco), there’s a nurse he’s got his eye on in Nero (she has nice legs, old Pete doesn’t miss a trick), a council woman he tried to ask out but rebuffed him (he won’t ask again!); another widower with an interest in ballroom dancing (‘work in progress’).

But the woman who has really stolen his heart is a local business woman, who is so affectionate she practically ‘mauls’ him. Problem is, this business woman already has a partner. Peter’s head tells him to ‘get out now’, but his heart’s telling him otherwise.

To further complicate matters, it turns out Peter has a love rival: Shady Kevin. Shady Kevin is another fixture on the Nero scene: a perma-tanned, grizzle-haired property developer with an eye for the ladies. He might be generously described as a silver fox but I think he looks shifty – and Peter agrees.

‘I don’t trust Shady Kevin one bit. He sits in the corner watching my every move.’

Malcolm, on the other hand, seems to be getting a bit bothersome in his old age. A hand-written letter arrived from him at my workplace, thanking me for the olive oil I bought him in Mallorca back in August. I’m a little alarmed by this, as I don’t recall telling him where I worked. 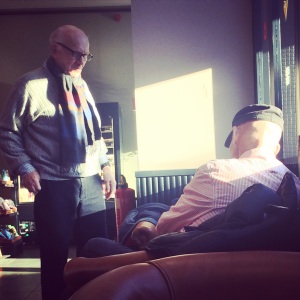 Luckily, the heat’s off because Peter tells me that Malcolm’s developed a small fixation with a woman called Bridget (stern-looking school m’am with bobbed hair; takes no prisoners). However, Bridget has a crush on ‘Colin Firth’ (a married father-of-two with Hollywood looks, who makes her heart ‘beat furiously’). Introduce Shady Kevin into this mix, who apparently fancies Bridget…  and poor Malcolm doesn’t stand a chance.

And if this wasn’t enough characters to add to this ever-evolving soap opera, let me introduce you to one more: Leery Len.

Leery Len is part of the late afternoon Nero crew (a whole new group of oddities, separate to the morning pensioner parade we’ve come to love and know). Leery Len is one of those highly-irritating people, who talks in a really loud voice so that every conversation is like one big stage show for those unfortunate enough to be around him.

This boombastic bozo meets with his friend religiously at 5pm every evening and spends a lot of time complaining bitterly about his perpetually-complicated love life, namely ‘idiotic’ women who don’t return his calls.

He also makes loud, border-line misogynist comments about women in his vicinity such as, ‘My oh my, she’s stunning and look at her legs!’

Occasionally, he bellows silly statements across to me such as, ‘I don’t know how you cope with that machine (my laptop) – I once signed up to email and got hundreds of the blasted things!’ and, ‘Do you think I should join Facebook? What’s the difference between Facebook and Twitter?’

Have you ever tried to explain the difference between Facebook and Twitter to a technologically-challenged buffoon? It’s harder than you think.

One final new Nero character who deserves a mention is Note Woman. Note Woman apparently delivers hand-written notes to people sat drinking their coffee. The notes are all steeped in paranoia, saying things like, ‘Do not trust the man you are talking to.’

I haven’t actually met Note Woman yet; she might even be an urban myth.

But I’m already looking forward to the day a crazed-looking pensioner sidles over and drops a note in my lap saying: ‘Do not trust that shifty man in the corner with the grey hair and suspicious tan….

8 thoughts on “Getting Shady With The Ladies”