Help! The husband and I are trapped in a ski chalet in the middle of nowhere, forced to socialise with strangers for four nights.

It’s like a bad episode of Come Dine With Me meets Big Brother.

We did, of course, bring this all on ourselves. We should have done the sensible thing and booked into a hotel for our Easter getaway. I had managed to find a lovely hotel on the slopes; it came with an indoor swimming pool, roaring fires and a guarantee that we wouldn’t have to converse with any other guests.

However, I’d also been tempted by the last minute offer of a room in this remote chalet, which can only be accessed by James Bond-style skidoos (I’m a sucker for a gimmick). The owner said there was only four other people staying – a couple with their daughter and boyfriend. Could it really be that bad?

‘There’s two options for the mini-break,’ I told the husband. ‘We can stay in a relaxing ‘ski-in, ski-out’ hotel where we can sip a glass of Chablis by a crackling fire and read our books in peace – or we can plump for a chalet where we will probably be forced to make small talk with four other strangers every night.

‘Let’s try a chalet again,’ said the husband. ‘After all, how bad can it be? Let’s be honest,  they can’t be any worse than Carol and Martin.’

Oh yes, Carol and Martin. Our previous and only taste of chalet-cationing was with quite an eclectic mix of characters in January 2012.

They included: a pair of fun-seeking lads from Chorley, a man and wife from Birmingham with a 9-month old baby, a chain-smoking couple from Geneva, and our party-loving pals who we’d invited along (they also proved the perfect social shield when we inevitably sloped off the bed early).

And then there was Carol and her hen-pecked husband Martin. Carol was a preposterously posh, slightly-bonkers housewife, bordering on parody. She actually claimed – hilariously – to be working class yet lived in a 6-bedroom manor house in the middle of the country, skied about four times a year and sent her daughters to private school.  She wore her hair in strange, little-girl plaits and had a permanent look of disapproval about her. This might just be that she was unfortunate enough to have quite a long, banana-shaped face.

Carol was incredibly feeble and only seemed to managed a couple of hours on the slopes, before staggering back into the chalet and crying, ‘I think I need a large G and T urgently.’

To be honest, Carol was quite fun dinner company for an evening or two but after several nights of her plummy drawl and constant references to her manor house back in Somerset, it started to get a bit wearing.

The husband and I developed a daft little obsession with Carol and Martin. After the holiday, the husband would occasionally cry ‘Carol’ to me in a silly psuedo-sexual voice and I’d breathily gush ‘Marrrtin’ back.

So, three years on, it was with some trepidation that we finally arrived in Morzine on Thursday to be greeted by a young Philip Seymour Hoffman in a green Landrover (the skidoos unfortunately being out of action due to lack of snow). He really did look like the late Philip Seymour Hoffman. See evidence below: 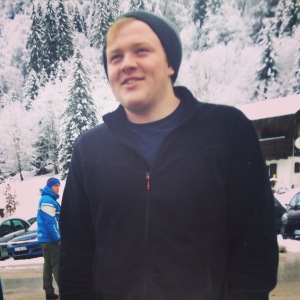 ‘The other guests have already arrived,’ said Young Philip Seymour Hoffman, as the Landrover bumped and bounced us into the wilderness. ‘They’ve agreed to hold back dinner until you get here. They’re really looking forward to meeting you.’

‘Great!’ I squeaked, while simultaneously looking wide-eyed at the husband, and thinking, ‘this is far more intense than I ever imagined’.

‘WE MAY HAVE MADE A TERRIBLE MISTAKE.’

We pulled up to the chalet and the hostess was waving at us a little too keenly from the front door. All thoughts of sitting in solitude in the corner and reading my book were rapidly evaporating.

‘They’re here!’ cried intense hostess over her shoulder. She held out her outstretched hand. ‘Come on in.’

The other guests were sat cosily in a circle around the fire, two empty seats awaiting us. But as they rose to greet us, I froze in abject horror.

Two familiar faces – one particularly long and banana-shaped – were smiling politely back at us, without so much as a flicker of recognition.

‘Meet your fellow guests,’ said the intense hostess in her sing-song voice.

‘This is Carol and this is Martin.’