Picture the scene. We’ve just arrived in the beautiful hills of the Algarve for a much-longed for mini-break, settled down with a book in a secluded grassy spot away from the hustle and bustle of the pool area, perhaps looking forward to a quiet snooze… when all of a sudden a bunch of raucous Essex folk descend.

‘Babe, babe,’ shouts the korma-coloured woman in the bejewelled bikini, wheeling a pram. ‘There a good spot here. Get Dave.’

‘Daaasvvvvve,’ yells Babe. ‘Get Filipo to bring us four sun beds. And get the beers in!’

Larger-than-life Dave, who looks and sounds just like James Corden but with none of his affability and a belly the size of Mount Vesuvius, bellows for Filipo.

Filipo dutifully trots off and returns, trundling the loungers behind him. Despite being twice his size, larger-than-life Dave doesn’t offer to help but merely jabs a chubby finger to where he’d like his loungers – namely within 30cm from us.

‘Oh no,’ grumbles the husband, whose tolerance levels for loud people are generally much higher than mine. ‘TOWIE have arrived!’

We thought we were safe here. It wasn’t by accident that we ended up relaxing on this grassy knoll. After a tour of the available sunbathing spots at the hotel, this particular location was carefully chosen for its quiet ambience: a safe haven from the highly-populated pool area – a mass of reddening flesh and squawking pool splashers – yet with views of the surrounding hills and a soothing babble of water in the background. How wrong we were.

This year has turned out less about The Battle of the Sunbeds (previously documented here and also here… oh, and here too – I’m clearly OBSESSED!) and more about The Battle to Eschew the Essex Crew.

‘Wouldn’t they be better in one of those cabanas down by the pool?’ I whisper. ‘They’d love it down there. Tell Dave!’

‘I’d even buy them a round,’ says the husband, as Filipo meekly scurries over with a tray of beers. ‘Just to get them out of earshot.’

‘Come this way, Dave,’ mimics the husband, in a soothing tone. ‘I’ve found you a lovely spot down by the lower pool, quite some way from here. I’ve even thrown in a bucket of Coronas!’

Larger-than-life Dave obliviously takes one sip of his beer and curls his lip.

‘Filipo,’ he booms. ‘Can I have another one of these but this time make it a cold one, would ya?’

Babe 1 appears to be grappling with a baby. ‘Babe,’ he says to Babe 2, holding up the baby and sniffing at its nappy. ‘Chantelle’s got a full package ‘ere.’

The husband lets out a long sigh.

That night, we decide to venture out of the Conrad compound and head to a restaurant recommended by a friend.

We ask the concierge for a taxi and – bizarrely – he offers to drive us himself. Before we know it, we are ushered into a luxury saloon and are soon purring down the immaculate driveway of the hotel, listening to the croon of Chris Martin.

‘The concierge certainly goes the extra mile – literally!’ I whispered to the husband. ‘Is this normal taxi rates or are we now paying for a private chauffeur?!’

Quinta do Lago, famed for its golf courses, is like a colonised version of the Truman show: palatial homes peek from behind perfectly-pruned palm trees, while pearly-toothed families pound down pristine pavements. If it’s culture you’re after, you won’t find it here.

It’s very hot in Portugal and the husband appears to have a shortage of shorts: dressy shorts, that is – the kind of shorts you might wear to visit a restaurant of an evening, perhaps teamed with a pair of… (ultimate middle class horror)… loafers.

The husband has one pair of such dressy shorts; they are a light blue Reiss number and could stain easily, if he is not careful. He is under strict instruction to cover them with a napkin at all times.

We arrive at the restaurant. It’s terribly refined and overlooks a picturesque lake. King of the pearly teeth Philip Schofield is on the table next to us, holding court with a group of TV exec types  – and a gaggle of girls straight out of Chelsea clink glasses opposite. Ex-footballer Graham Souness is apparently at the bar.

The husband orders a black cod broth. He takes one mouthful and somehow manages to douse his shorts in splodges of soy sauce.

‘Something bad has happened,’ grimaces the husband, peering down at his lap, the protective layer of his napkin nowhere to be seen.

‘Really, really bad,’ says the husband, sliding his lower half further under the table. ‘It’s too distressing for you to even see.’

I throw my hands up in a signal of mock despair and as I do so, I somehow manage to knock a whole glass of wine straight into the husband’s lap, dousing his ill-fated shorts even further.

The husband gasps; waiters rush over… even Schofield stops his patter and turns to stare.

But it’s too late to save them.

I think the husband will be wearing trousers from here on.

The next day, I peer out of the window to check out the state of play on the grassy knoll. The Essex crew’s loungers from the previous day are still there, dominating our quiet spot. Those loungers had never been there previously, I note, but overnight Filipo has failed to move them back to wherever they had came from. This was troubling; Dave and co. had effectively SEEDED the area. 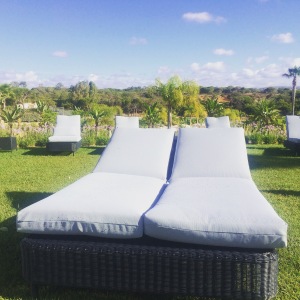 ‘I’m going to go down and bagsy our loungers,’ I tell the husband. ‘But I’m also going to move the additional loungers out of the way to discourage any further TOWIE invasion.’

‘Fine with me,’ says the husband. ‘But please let it be noted that this is not the behaviour of a sane person.’

I furtively scamper down to the pool area. By the time I have carted off six loungers (some double ones- who knew?!) and restored the grassy knoll to its original half crescent sunbed formation, I have worked up quite the sweat.

‘All done,’ I say to the husband, who is patiently sitting at the breakfast table, engrossed in his book (Wonder by R.J Palacio).

I turn back just in time to see feeble Filipo wheeling the sun loungers BACK to where I had moved them from, with larger-than-life Dave swaggering brashly behind him.