After listening to Lipo Liza‘s woeful tales of extreme fat removal and dodging the advances of omnipresent Big Grey Man, it seemed only fair that I should finally get a new gym ‘buddy’ who was a bit easier on the eye.

My latest gym friend is a bit of a hunk – a young hunk, in fact – but with a beard. Yep, a beard. Not that weird goaty thing that Brad Pitt grew; I’m thinking more of a bristly Ben Affleck in the film Argo. 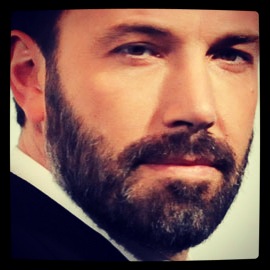 You know when you catch someone’s eye several times by accident or suddenly clock that you’ve been vacantly staring at them for some time? That’s what happened with The Bearded One last month. I was on a cross trainer directly opposite him and realised I had been staring in his general direction for quite a while, as my legs peddled away.

I then started to think, ‘Oh no, MAYBE he thinks I’m staring at him because I fancy him. Which I don’t of course (having only eyes for the husband). Except now, I’m acting like I DO fancy him.’

My friend Andrea and I have a name for this: it’s called Toy Soldier Syndrome (the name is a long story). It’s basically where you become convinced that someone THINKS that you fancy them so you start acting flustered and coquettish around them – even though you definitely DO NOT fancy them at all (kind of a weird self-fulfilling prophecy).

After a few minutes, I stole a quick glance back at The Bearded One to ascertain the state of play. As soon as my eyes rested on his, he smiled straight back at me!

The Bearded One then dismounted from his bike and, despite there being many available cross-trainers, he curiously stepped onto the one right next to me! I was so flustered that I hastily fled the cross-trainer completely, cheeks flaming. This silly non-event was made worse by the fact that the husband was obliviously lifting weights, just several metres away.

The following week, I whipped into Marks and Spencers at my usual gallop and was just striding purposefully towards a Super Whole Food Salad, when a voice said in my ear, ‘You won’t need a cross trainer to work that off!

Cripes… it was him. Bearded and besuited.

‘I’m on a healthy kick,’ I squeaked, immediately going a nice shade of beetroot. ‘I’m going on holiday tomorrow.’

‘Me too!’ he exclaimed, a youthful glint in his eye. ‘I’m going to Ibiza. My girlfriend’s parents have a boat there.’

‘I’m going to Croatia with my husband,’ I said, sounding like a prim housewife. And immediately thinking, ‘Oh no, he probably now thinks I’m some desperate old housewife with a crush on him.’

I scurried off to join the queue, scooping up a pack of Percy Pig sweets on the way.

I have a fairly serious problem with Percy Pig and Haribos. About twice a week, I purchase a pack at a petrol station or supermarket – and then gluttonously tip the whole lot into my mouth – in one go. I probably need to see a therapist – shortly followed by a dentist.

I dashed to the car, clambered behind the wheel and before you could say ‘Super Whole Food Salad’, I had rammed the whole pack of Percy Pigs straight into my mouth – just in time for The Bearded One to be passing by.

He smiled at me through the car window in a slightly bemused manner and gave a departing wave. I attempted to smile back but my cheeks were bulging like a giant gerbil.

‘Oh great,’ I thought, ‘I just told The Bearded One that I was on a health kick and then he just saw me gorging on a bag of Percy Pig sweets in a most uncivilised manner.’

I vowed to have a month off from the gym.