Nesting. Ew! Who invented this word?

Nesting is apparently an obsessive urge to clean, organise and get your life in order – before welcoming a new being into the world.

Obsessive organisation? That sounds like my normal daily life, with or without an impending addition to the family.

Whatever you want to call it, this strange lull between finishing work and awaiting the baby is a last-chance opportunity to do all the jobs you’ve been putting off for years.

This is because – as everyone keeps pointing out – when the baby arrives you won’t even have time to trim your own nostril hair let alone clear out the condiments cupboard.

Here are some jobs around the home that I have finally got round to tackling (mainly out of sheer boredom at not being at work, rather than any primal nesting instinct).

First up…  the freezer. Does anyone ever actually clean a freezer? This necessity was only brought about by the fact that people have been helpfully messaging me saying, ‘stock up the freezer’.

I’m not sure exactly what happens when you have a baby but I can only assume that you turn into a sleep-deprived zombie, unable to stagger the 300 metres down the road to the nearest Co-Op, or too enfeebled to speed-dial Dominos.

Still, there did seem to be a worrying amount of frost building up in the top compartment of the supposedly frost-free freezer – so much, in fact, that for several years now, I’ve been having to literally ram items into it, between mounds of ice. 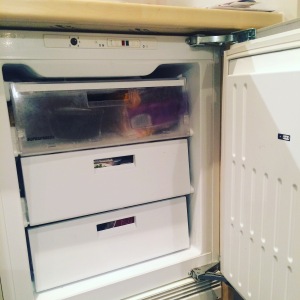 There was only one thing for it: in order to stock up the freezer, I was going to have to un-stock it first… Fossilised fish pies and leftover lasagnes – entombed in ice – were languishing in the bottom shelf, buried beneath Jolly Green Giant’s finest frozen peas. There was even coffee in there. Who freezes coffee? That must have been me!

I have to say there was something strangely satisfying about chiselling off great hunks of ice with a kitchen spatula.

Next task: washing the duvet. One day, I was enjoying a coffee in my favourite Caffe Nero when I looked out of the window and saw a friend from work bundling her duvet into the laundrette opposite. When quizzed, she revealed that she had taken the duvet to be washed… and does so every six months! Dry cleaning the duvet? This essential housewife responsibility had somehow eluded me.

It’s time to come clean here (no pun intended)…. I have NEVER washed our duvet. The sheets get washed, ironed and changed every week but the actual duvet? ‘Fraid not. My mother-in-law will be horrified.

I asked a few people at work and apparently yes, everyone takes their duvet to be washed at fairly regular intervals. The husband and I are clearly the only people to have spent 10 years lying under a filthy duvet, weighed down with dust mites and dead skin cells.

One quick trip to the launderette, three hours later and £20 lighter, I was in possession of an (almost) brand-new duvet.

It felt good. So good, in fact, that I decided to return the next day with another duvet. By Day 3, I was seeking out anything that could be dry cleaned: pillows, cushions, you name it…

This was going to become an expensive pastime.

Luckily for me, there was a more pressing matter to attend to: namely the smelly washing machine. Strange as it sounds, our washing machine has been emitting a rather pungent odour for quite some time. I’ve been trying to ignore it but in recent months the smell has been begun to seep out of the cupboard and into the hallway. What could it be?

A quick Google search revealed that a malodorous washing machine is the result of using too much washing powder, easily cured by several alternate hot cycles of bleach and white vinegar. Job done.

It was time to turn my attention to the ‘odd and sods’ drawer. Everyone has that drawer. It’s the drawer that you shove ‘stuff’ in when you don’t know where else to put it.

The odds and sods drawer may contain (in no particular order):

a. Old currency from an unknown holiday destination. The only way of determining which country it is from is by studying the obscure portrait on it for some time and then reaching the realisation that Greece converted to the Euro in 2001, thus rendering those drachmas completely useless.

b: A variety of phone chargers and leads – a great nest of tangled wires with absolutely no idea where they came from or which device they belong too.

c. Hundreds of lighters, most of which don’t work. A legacy from the days where a man would stand on the street corner shouting, ‘gas lighters… three for a pound’.

I binned the lot. It felt quite liberating.

So there we have it. Nesting complete. The baby will almost certainly be happier knowing that its parents are sleeping under a freshly-laundered duvet and that there’s an emergency charger for the Nokia 8210 (circa 2001) in the kitchen drawer.

And if the baby happens to fancy some lamp chops of indeterminable age, I know exactly which freezer compartment they’re in.